Editor’s Note: We are bringing you a double feature here at BBYK. Two reviews for the new film, Logan. The first review contains some spoilers so beware. If you don’t want any spoilers, head on down to the second review after the break.

Ever since the Dark Knight, every superhero movie has been held to a slightly higher standard. Comic book inspired cinema has largely served as a form of nostalgic escapism. The plot is not meant to be engaging nor the dialogue particularly inspiring. Christopher Nolan’s Batman trilogy proved that a superhero movie can be fun and thoughtful. The Dark Knight showcased a hero that was confused and conflicted, going against an evil that was cunning, unpredictable, and seemingly unmotivated.

Instead of having the hero “man up” with a montage (they saved that for the last movie) they showed a man desperate to rid himself of the responsibilities of the cowl, longing to return to a time in the past when things were simpler and he could just be with his love. In this way, Batman mirrored the audience, which was also in need of a respite from their own responsibilities. These movies aren’t just for kids, the people that grew up watching these characters on Saturday morning cartoons are now adults with real jobs that pay them real money. A financially influential demographic that now demanded that this form of entertainment cater to them.

While comic book movies have gotten thematically darker (see the horrible Batman v Superman), the business aspect of these movies has always tempered the MPAA ratings. The Batman trilogy (along with the wildly successful MCU) has always been a PG-13 affair. Enter Deadpool, an R-rated flick that allowed its titular “mercenary with a foul mouth” to really stretch his chimichangas. It was a risk that paid off, and the movie’s commercial success proved that adults can handle and indeed crave more mature forms of entertainment. It was a movie we deserved, even if the studios weren’t sure we needed it right now. It’s the reason we now have the gloriously bloody R-rated Logan. ⚠Spoilers ahead!⚠  It is also quite fitting that a Deadpool 2 “trailer” serves as an introduction to the movie.

Logan does a great job distancing itself from the X-men cinematic universe while also paying homage to the franchise. There is a time jump to the not so distant future. A future where Mexico still hasn’t paid for a wall and frat boys have traded in their bro tanks for colored tuxes. Wolverine is an old disillusioned alcoholic, desperately saving the money he makes as a limo driver to one day buy a boat and leave it all behind with his bff Chuck. I will get into Hugh Jackman’s performance later, but Patrick Stewart really gets to strut his Shakespearian acting chops here in a most poignant and affecting turn as an older Charles Xavier, who is no longer in control of his immense powers.

Suffering from a degenerative brain condition that causes seizures, Professor X’s issues are all the more complicated and dangerous due to the powerful psionic blasts that accompany each episode. This not-quite-post-apocalyptic world also has “X-men” comics, but in this darkest timeline, these are akin to your novels or movies that are “based on a true story.” The X-men are all gone (accept Logan), killed off in the first of these seizures. Now hidden away in a giant metal tank, Professor X, a brilliant force to be reckon with in his prime, is left a shell of his former self, haunted in his moments of lucidity by the guilt of the tragedy that befell the family he founded. 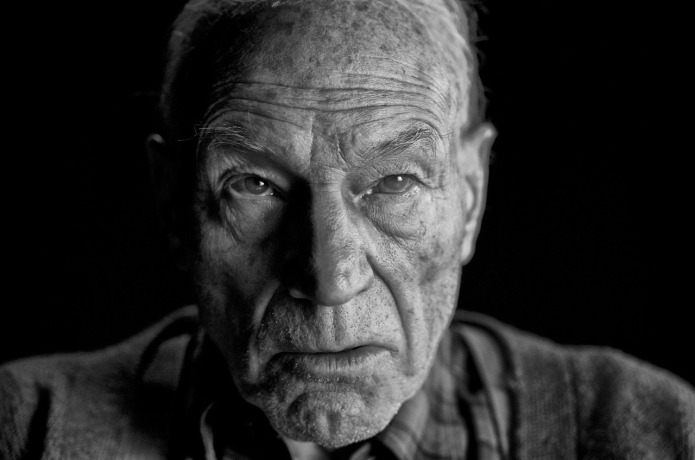 So here we are, left with the two remaining mutants on the planet (so they think). They want to just be left alone, preferably on a boat that’s listed in the local Pennysaver. All of a sudden, Laura (X-23) arrives in their lives. Turns out, after the world rid itself of mutants, they quickly got to work creating new ones to serve as soldiers. Laura was one such example that managed to escape. Now hunted by her creators at Transigen, Laura needs Logan’s help to get out of Dodge. These three would eventually go on a road trip together in an effort get Laura to “Eden,” a safe haven which lies in Canada. Dafne Keen is great as Laura, equal parts precocious and deadly. When it comes to the action sequences, Laura is ferocious, slashing and kick-stabbing her enemies with her adamantium claws. She is literally the Mexican Wolverine, homes! There are plenty of opportunities to scrap in this movie, and just like Queen Cersei, Laura always chooses violence.

Let’s get to Hugh Jackman’s performance.  He has been this character for decades. We first saw him in X-men, brooding and getting into a fist fight. We first see him in Logan, brooding and getting into a fist fight… only now he gets to drop the F-bomb. The R rating really unleashes the character, and Hugh Jackman takes advantage of the freedom, in this his swan song, to slash in his finest performance as Wolverine. If you live a long time, you will see some of the people you care about die. When you live as long as Logan, you see all of them die. He is jaded, tired, and dying from adamantium poisoning. Physically and emotionally broken, he keeps an adamantium bullet with him at all times, a personal reminder of the potential freedom death might bring him. This is heavy stuff, flipping man’s constant struggle with mortality on its head.

As much of a grizzled loner as Logan thinks he is, the truth is he can’t help himself from helping others. In fact, no character on the Marvel roster has ever teamed up more often in the comics. He looks grumpy, but he’s got a heart of gold. Logan’s paternal instincts to protect the gifted Laura, in spite of his own doubt, gives Wolverine the selfless hero’s goodbye he deserves. This is the adult Wolverine movie we’ve all wanted and finally received. Props to director James Mangold for being true to the source without getting bogged down by the material. Sure, there is going to be a reboot at some point, but Hugh Jackman leaves the game with an absolute statement piece. This is about as good as it gets action aficionados and comic nerds. Go watch this film!

Growing up as a kid in the nineties, I had a trio of super heroes that I ranked as the coolest good-guys to ever put on a suit of colored spandex. At the top of the list was the unquestionable superhero king of all badassery: Batman. Following in a distant second behind the dark knight was the nerdy but lovable smartass Spiderman. At a very close third was everyone’s favorite, pissed off, ‘roided-up Canadian, Wolverine. The gritty, rage-filled Canuck that is more likely to slice your face off rather than say please, thank you, or offer you reasonably priced healthcare.

But what do you get when you take Wolverine and you take away the animated violence, the yellow spandex, add a healthy dose of alcoholism, an overdose of self-loathing, and toss in plenty of very non-cartoony blood and gore? You get Logan, the thoroughly mortal man trying to survive a day at a time. You get the kind of fleshed-out character that X-Men fans should have been given four or five movies ago. If I was given this kind of Wolverine back in the nineties, he probably would have been moved to the top of the list as my all-time super hero favorite (and I might have been emotionally scarred as a child).

I walked into the movie assuming it was going to suck. After all, this felt like X-Men movie #18 and the last Wolverine movie I saw featured a giant samurai robot (I mean–are you fucking kidding me!?) I was pleasantly surprised, to understate my reaction. The movie did what very few superhero movies can do; it fully made the jump from a cartoon comic book into a something more tangible and real, while simultaneously giving a nod to its roots. The movie is filled with Easter eggs and references, but at the same time it isn’t weighed down by any of them. Hugh Jackman and Patrick Stewart both give their best performances in the series, and if this really is the final chapter for them both, then it couldn’t have been more properly ended. My only disappointment is that it took them this long to get it right.