We are in the middle of the NBA playoffs, and that means we are treated (or not) to a lot of the TNT crew. That means plenty of Charles Barkley. Love him or hate him, he has been one of the most recognizable NBA personalities of the past 3 decades. In recognition of his stellar commentary and his milquetoast demeanor, BBYK dives into the retro files for a b-ball gaming gem you may have never heard of.

We get sequels all the time, many of whom we never asked for (Dumb and Dumber to). Some, we unfortunately did (Boondock Saints II: All Saints Day). Every once in a while we get one so bizarre and out of nowhere that you just have to pause and let your brain piece together the multitude of signals firing out “WTF’s!” That’s what you get with Barkley, Shut Up and Jam: Gaiden, a pseudo-sequel to it’s SNES counterpart by the same name sans the “Gaiden.” The original was an NBA Jam knock-off.

The sequel is… not that?

You can’t make this stuff up, so I’m not even going to try. Here is the synopsis for the game:

The game starts off in 2041, twelve years prior to the main part of the game, in “post-cyberpocalyptic Neo New York”. Charles Barkley performed a powerful dunk called a Chaos Dunk at a basketball game, inadvertently killing most of the people in attendance. As a result, basketball was outlawed and many basketball players were hunted down and killed.

In 2053, another Chaos Dunk is performed in Manhattan, killing millions. Barkley is blamed for the Chaos Dunk and is hunted by the B-Ball Removal Department, led by Michael Jordan.[2][4] Barkley is rescued by another outlaw referred to as the Ultimate Hellbane. Hellbane leads Barkley to the tomb of LeBron James, revealing that Hellbane’s real name is Balthios, the octoroon great grandson of James. The ghost of James tells the two to seek the Cyberdwarf, who is hidden in New York’s sewers. While searching for the Cyberdwarf, they are joined by a cybernetic Vince Carter, who has lost his memory. Upon finding Cyberdwarf, the four of them rush to a nearby church, where Barkley’s son Hoopz is hiding. In the church, Jordan kills Father Larry Bird and holds Hoopz hostage. Cyberdwarf, looking at Hoopz, comments that Hoopz may be “The One”; this comment restores Carter’s memory. He was killed along with many other basketball stars, but was rebuilt by the terrorist organization B.L.O.O.D.M.O.S.E.S. to kill Hoopz. Carter joins with Jordan, but the two are driven off by Barkley and his party.

Cyberdwarf theorizes that B.L.O.O.D.M.O.S.E.S. used a powerful basketball called the Ultimate B-Ball, the same B-Ball used by the Monstars in the Space Jam to steal the powers of basketball players, including Barkley himself, to perform the recent Chaos Dunk, so they travel to the old Spalding building to find a rumored extremely powerful basketball. There, they discover that such a ball had been created, dubbed the Hell B-Ball. This ball was so powerful that a janitor who mishandled it inadvertently performed a Chaos Dunk in the building years ago. With the Hell B-Ball in hand, the party seek out B.L.O.O.D.M.O.S.E.S.

They find the B.L.O.O.D.M.O.S.E.S. headquarters on the slave ship Necron 5. After freeing Carter from his programming and defeating Jordan in basketball combat, they find the leader of B.L.O.O.D.M.O.S.E.S., a shadowy version of Barkley created by the Ultimate B-Ball to destroy all life on Earth with a super-powerful Chaos Dunk, then repopulate the earth with Barkley clones. Shadow Barkley is defeated, but machinery on the ship is set to perform the Chaos Dunk without Shadow Barkley. Barkley stays behind while the rest of the party escapes from the Necron 5. Charles Barkley then performs another Chaos Dunk, destroying the ship and saving the earth. The game ends in a cliffhanger, where Hoopz and Cyberdwarf are aboard an escape pod in space without destination, and Balthios is left behind to fight the Monstars. 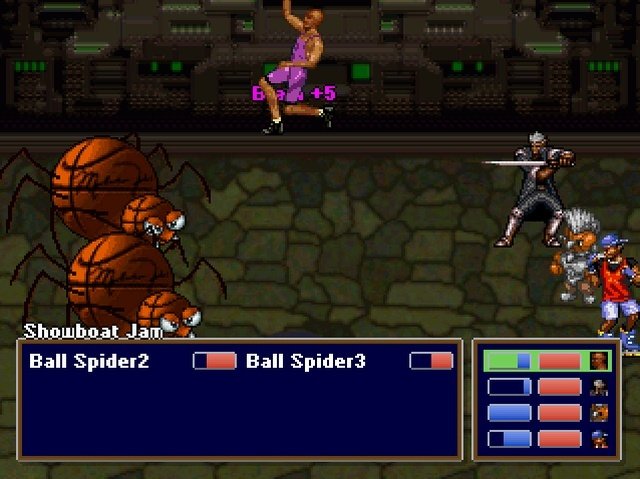 So… yeah. The thing is, Tales of Game’s Studio does a really good job here. The game is a solid jrpg, with the fight mechanics very similar to that of an old-school Final Fantasy. The story is also quite hilarious, bringing in a whole host of NBA legends as both allies and foes. There is also a loving nod to the eccentricities of the early days of rpg’s where you were bombarded with overly wordy text blocks and poor translations. The demographic for the game is narrow indeed, but if you like jrpg’s and the NBA, this is a rare mix.