*You are going to get double the fun with two reviews for the price of one click. Lucky you. First one is spoiler free, second one not so much. Please enjoy these great write-ups from two of the most talented reviewers I know! Also, Thanos is a BOSS!

Tense string music punctuates the high stakes. Everything about the film is big, and every previous film in the franchise has built toward this one. The acting performances are pitch perfect across the board, and every scene is filled with superb visual effects, even by Marvel standards. The story is packed with plot points, but this forces the witty banter to move faster. The result is a taut film that never lets its foot off the gas for its 2 1/2 hour run time.
There are so many Easter eggs you’d think Jesus had risen. JK, no one actually beats death in this one. Themes of sacrifice abound and fit snugly within the story. The drama is pretty tense and the feels are real. The film spans multiple worlds, and it will shatter yours.

Phase 4 of the MCU is sure to be different after the events of Infinity War, and it is exciting to see where the franchise will go next. Nevertheless, “Avengers: Infinity War” 9/10 Brofists.

After a week in theaters, Marvel’s Infinity War has already blown ticket sales out of the water and is fast on its way to becoming the highest grossing film of all time. Not only that, the film is only the first part in the great two-part series. The second half is coming in another year and it promises to milk the audience for even more money. A small part of me bitterly resents the fact that the Disney/Marvel movie monster can make nerds hand over their money faster than a heroin addict hands out sexual favors, but given how I hand out my money faster than most, I really can’t cast any stones. I know full well that a year from now I’ll be in the audience, salivating over part two. So I really I don’t want to talk about the how the evil Disney/Marvel movie monster is playing us like a fiddle, or how superhero movies all follow the same formula, or whether Iron Man’s one liners are bastardizing American cinema, or whatever; debating the legitimacy of the super hero movies just makes me tired. At the end of the day neither the movies nor the comic books ever claimed to be high art – they’re just plain fun. Bearing that in mind, I do want to talk about the two aspects that make this movie unique: 1) the villain and 2) the ending. 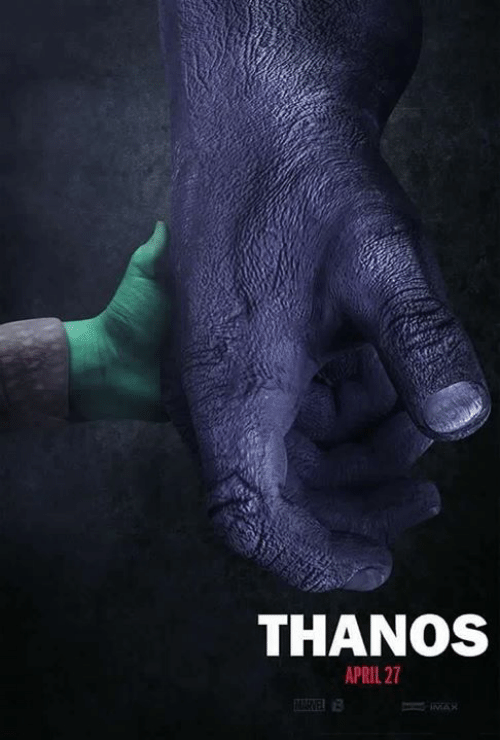 The challenge with making a movie with as many characters as Infinity War is weaving a tangled mess of subplots into one coherent story. Infinity War deals with this problem very effectively by focusing specifically on one character; the bad guy. Thanos is the real protagonist of this movie and the myriad of superhero subplots all orbit around his weightier central role. He is a great big purple muscle man, with goatee carved into his chin, and really intense opinions on overpopulation. These feelings are so intense, in fact, that handing out condoms on college campuses just doesn’t cut it for him. Instead he wants to gather the ultimate power of the infinity stones and use them wipe out half of sentient life in the universe. That may seem a little extreme, but ya know, “balance” and all that stuff.

Like most super hero movies, the motivation of the bad guy is a little ridiculous if you think about it too much. Where his character really shines is in the melancholic performance of Josh Brolin. Thanos is portrayed as a somber and indomitable madman that has convinced himself that he needs to sacrifice half the universe to save the rest. His character packs just enough humanity to force the audience to sympathize with his horrible burden, and his relationship with his kinda-sorta daughter, Gamora, is heartfelt enough to make him into something other than a evil purple hulk. It’s the first time that Marvel has put the bad guy’s emotional struggle center stage, and made the Hero’s struggle to stop him mostly background noise. It’s a noteworthy step away from formula, and it definitely ties together a movie that would otherwise be just a chaotic jumble of subplots.

And this leads me to the next big shift in Marvel formula: the bad guy wins. Thanos gets his hands on all six infinity stones, and he uses them to exterminate half the universe, including nearly a dozen heroes that we’ve come to know and love. Taken on its own, this isn’t exactly groundbreaking since many other shows have experimented with miserable endings (just look at Game of Thrones). But in the context of a Marvel universe, this is like learning that Santa Claus isn’t real, while walking in on your parents getting it on, right after you saw your dog get shot. In short, this is a really fucking big deal.

The whole premise of superhero movies is that the good guy ultimately wins. The bad guy may score a point or two, and maybe kill off the occasional named character, but never on a scale like this. Supers are unceremoniously killed off wholesale. Black Panther is literally still showing in some cheap movie theaters, which is funny. Because he’s dead. Are you ready for the fourth reiteration of the Spiderman series? Because he’s dead too. I Hope you enjoyed Doctor Strange’s crappy American accent while you could. Because he’s dead. It’s a really good thing we just fought an entire civil war over Bucky. Because he’s dead now. Hope you weren’t looking forward to Vision/Scarlett Witch’s blossoming romance. Because they’re both dead. Sammy Jackson is such a badass right? Not anymore. He’s dead. Hope you weren’t planning on seeing that adorable teenage Groot grow up. Because he’s dead. In fact, pretty much all the Guardians of the Galaxy are dead. Everyone is dead. My childhood is dead. And not the quick and merciful kind of dead, more like the kicking-and-screaming-as-you-slowly-bleed-out kind of dead.

I walked out of the movie feeling surprised, tricked, and a little pissed off. Marvel movies have been reinforcing all my silly preconceptions of good vs. evil for over a decade now. Suddenly now feel like they’ve been setting us up for a punch that is ten years in the making. But here’s another thing; after I cooled down and thought about it, I couldn’t think of a better way to end that movie. If the good guys managed to grab the time stone, jump back in time and reset the world – that would have been an even worse ending. If everyone lives, nobody dies, and all the Avengers skip happily into the sunset – that would be so sickeningly sweet it’s almost nauseating. Additionally, if we get to the point where everyone can be brought back from the dead by whatever shiny plot device, then what significance is any character’s death? So as much as the end of that movie irritates me, I can’t really definitively say how I would have done it better. For this reason, I’m going to be a good little consumer and wait to see how the next movie ends. If it isn’t perfect, if it doesn’t live up to the painfully high bar that the first movie has set, then I swear I’m going to burn Disneyland to the ground.